Very few names have more value to a town than John Lincklaen has to the Town of Cazenovia. After serving in the Dutch navy, Lincklaen was dispatched by the Holland Land Company from Amsterdam, Holland to Philadelphia, Pennsylvania in 1790 to help North American Land Agent Theophilus Cazenove explore new pieces of property put up for sale by the State of New York. 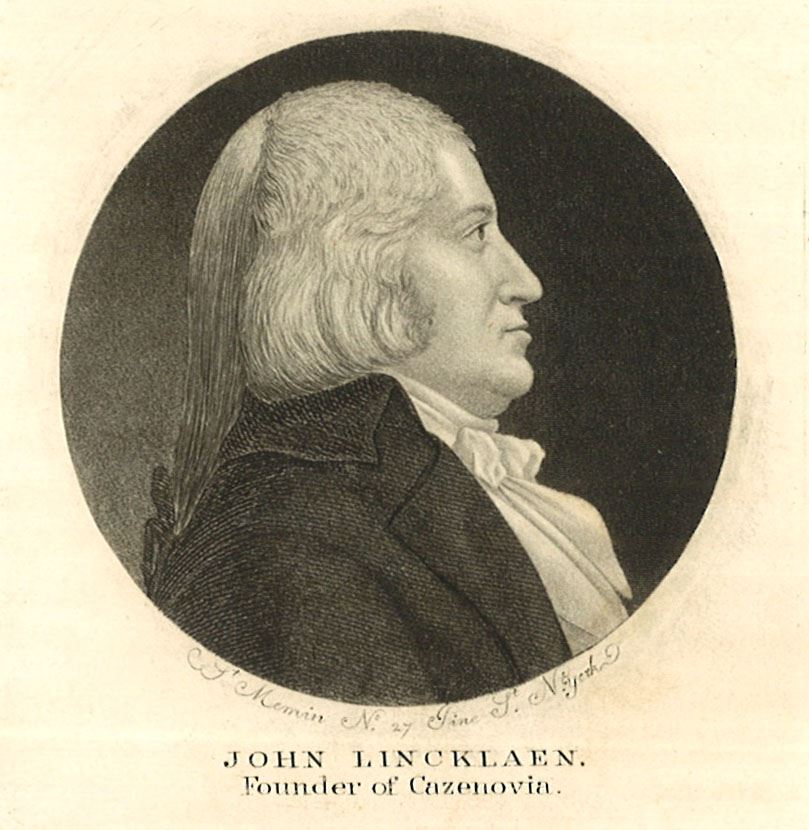 Lincklaen traveled in 1792 through the Chenango Twenty Towns looking for a piece of property that the Holland Land Company would buy. Upon his return from the wilderness, it was agreed that the Holland Land Company would purchase the Road Township. At that time, Road Township consisted of a number of towns in both Madison and Chenango Counties. Amongst them was the southern part of modern day Cazenovia. He would purchase the northern part of Cazenovia from Peter Smith of Smithfield in 1794.

With the lands purchased Lincklaen set out with a group of men to settle the area along what is now known as Cazenovia Lake. He started with a merchant, carpenter, mason, teamster, and nine other additional workers. Property sold for $1.50 an acre as fast at the surveyors could set the lot size. Lincklaen gave Cazenovia its name in honor of his friend and co-worker Theophilus Cazenove. Lincklaen developed many of the early businesses in Cazenovia including the first store which was operated by Samuel Forman, the first post-office, a woolen mill, grist mill and saw mill.

Lincklaen also loaned money in the form of mortgages to individuals so that they could purchase property in the town. This mortgage between Nehemiah White and Lincklaen dated June 26, 1810 is for a parcel in the Road Township Reservation of the Town of Cazenovia in the amount of $344.53. The mortgage was satisfied on December 16, 1811.

Before the NYS Thruway was opened in the 1950s routes 5 and 20 were the main thoroughfares for traveling east-west through this county and the state.

Route 5, also known as the Seneca Turnpike and the Genesee Turnpike, runs in the northern mostly flat portion of Madison county connecting the City of Oneida, Wampsville, Canastota, and Chittenango.

Route 20 traverses the hilly southerly half of the county connecting Madison, Bouckville, Morrisville, Nelson, and Cazenovia.

The Third Great Western Turnpike Road Company was established in 1803 for the purpose of constructing a road from Cherry Valley west to Cazenovia (a continuation of the Cherry Valley Turnpike originating in Albany). The president of the company from 1803 to 1822 was John Lincklaen. Lincklaen was succeeded by Jonathan D Ledyard who remained president until the corporation was dissolved. Other members of the corporation were Ledyard Lincklaen, George Ledyard, Sidney Fairchild, and Lewison Fairchild. Construction consisted of removal of trees and stumps as well as boulders, and grading land. All was accomplished by manual labor and the aid of horse and possibly oxen. The portion of the road within Madison county borders totals approximately 23 miles. The road reached Cazenovia in 1809. This was a toll road and toll gates were placed approximately every 10 miles along the route. Tolls were collected by individuals hired for the purpose by the company. It was not uncommon for the toll collector to live adjacent to the toll gate. 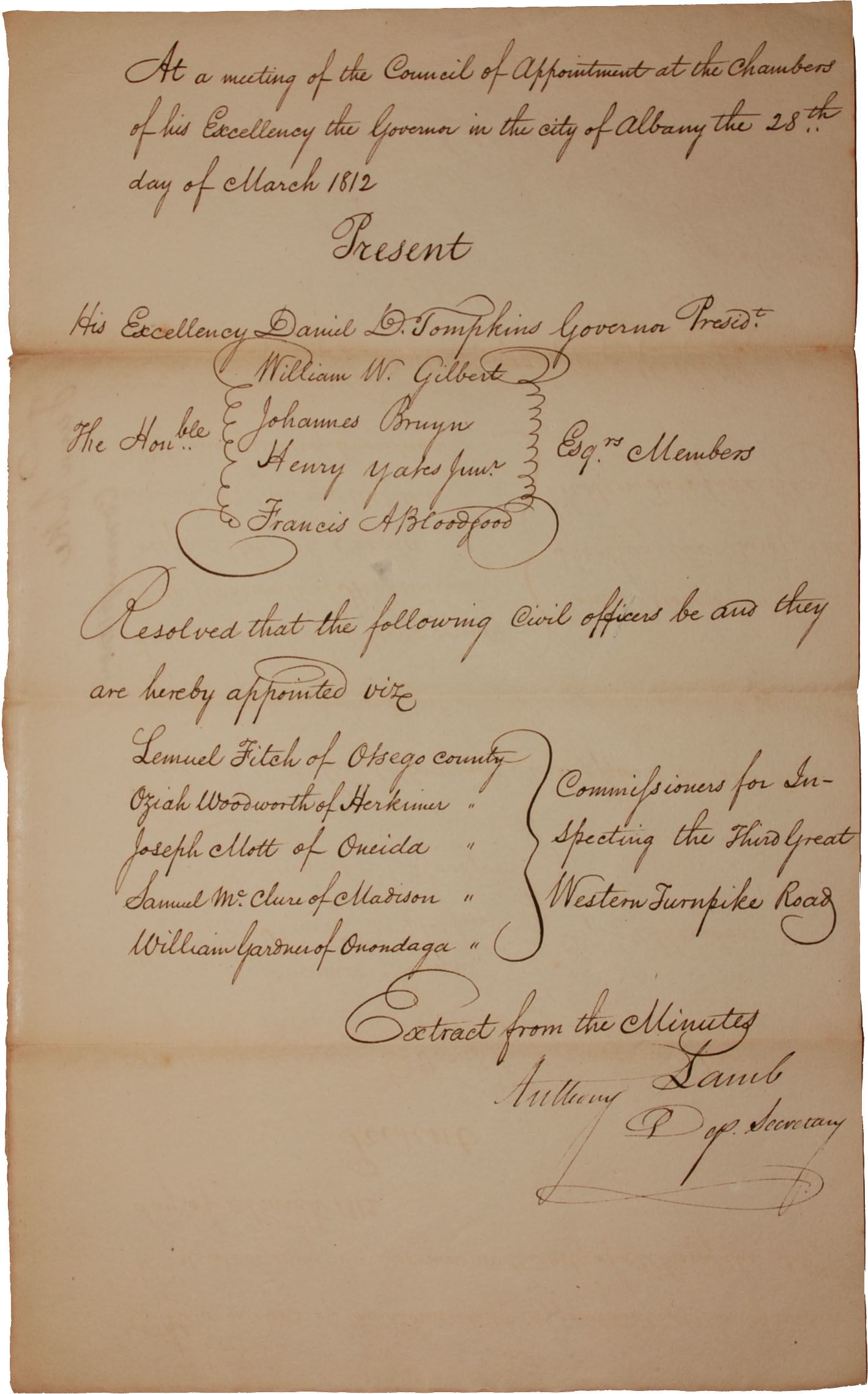 An interesting court case in the Madison County Clerk's archive collection is Phillips versus The Third Great Western Turnpike Road Company originally tried in Justices Court. The basis for this action, in part, was the law that stipulated that for every day that a toll gate was not in proper working condition a $5 fine would be assessed (Section 59, Article 4, Title 1, Chapter 18). Phillips claimed that the toll gate, located on the west side of the Cazenovia Lake, was in improper working condition from December 14 through December 25, 1858, a total of 11 days. According to one witness, Sherman Wait, the toll gate was normally raised to a height of four feet above his head (relative to him sitting in the driver's position of his stage coach). On the night of December 21, 1858 the gate was uneven and while the horses passed through unharmed Wait was struck in the chest and severely injured. In the end judgment was in favor of Phillips in the amount of $67.76. The case was appealed. The Third Great Western Turnpike Road Company claimed that the justice of the peace incorrectly calculated the judgment. A Supreme Court judge reviewed the case and upheld the decision of the justice of the peace.

The Cherry Valley Turnpike was heavily used for transportation of goods and people through the 1820s. With the opening of the Erie Canal in 1825 and various railroads in the 1840s use of the turnpike declined. In the 1850s the road was widely in disrepair and by 1876 the county authorized the towns of Cazenovia, Nelson, Eaton and Madison to use the abandoned Cherry Valley Turnpike as a public highway.

The Cherry Valley Turnpike has been incorporated into U.S. Route 20, one of the Nation's coast-to-coast highways. Route 20 begins on the east coast in Boston, Massachusetts and terminates on the west coast in Newport, Oregon. Total length of the highway is approximately 3365 miles.

Found on reverse side of a Sheriff's Sale Notice: 1841