The First Governor of the Nevada Territory Was From DeRuyter

A great deal has been written about the infamous Loomis Gang in Madison and Oneida counties. George Walter, columnist for the Syracuse Post Standard and Madison County Leader and author of "The Loomis Gang," wrote extensively about them during the early to middle twentieth century. Less is known about the attorneys and judges during the reign of this local criminal organization. While this group conducted their criminal activities and Constable Jim Filkins was doing everything in his power, and beyond, to put a stop to them, judges came and went. Unfortunately due to a lack of evidence, reluctance of witnesses to testify against them, or corruption in the legal system, the Loomises and their brethren suffered little for their years of tyranny in Central NY. One of the judges who sat on the bench during this period was James Warren Nye.

Nye was born June 10, 1815 in DeRuyter and studied law in Troy, NY (Rensselaer county). He returned to Madison County and was admitted to the bar. In 1839 he was elected District Attorney. From 1840 to 1848 he was county judge. Nye was appointed Major General of the state militia in 1846 (see oath of office (PDF)). After his last term as county judge he moved to Syracuse where he practiced law until 1857. He then relocated to New York City where he became the first president of the Metropolitan Police Board. He served in this capacity from 1857 to 1860. President Abraham Lincoln appointed Nye first (and only) governor of the Nevada Territory (1861). Nye was a strong supporter of universal suffrage and abolition. He worked diligently to keep the Pacific states and territories in the Union during the Civil War. When Nevada became a state (1864) Nye was elected to the U.S. Senate. He served as senator until 1873.
Death
Nye died on December 25, 1876 and is buried at Woodlawn Cemetery in New York City.

Acclaim
James Warren Nye is just one of many Madison County individuals to rise to national and international acclaim.

Drawing
A pencil drawing of Nye by local artist Michelle Jenkins was commissioned by the county in 2009 and is on display in the County Clerk’s office. 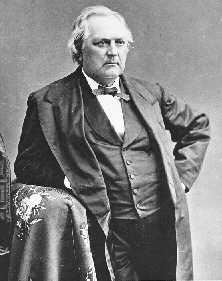 The Loomises Didn't Pay Their Lawyers


In 1847 George W Loomis Sr. hired law partners Albert N Sheldon and Jervis B. Eldridge to defend his son Wheeler, then under the age of 21, who had been arrested for an assault and battery. Sheldon took the case and other similar cases defending Wheeler again for assault and battery and then Wheeler, William, George W Jr, and George Sr. for rioting and assault and battery up through about November 8, 1848. At this time Sheldon left the partnership being bought out by Eldridge. All interest in Sheldon's cases were transferred to Eldridge. At this point the Loomises requested Eldridge to continue defending them in their various indictments and charges. Apparently Eldridge spent considerable time and expense working to defend the Loomises up to about August of 1850 without being paid. In the complaint, sworn before Judge Nye, Eldridge is seeking judgment in the amount of $200 from George W Loomis Sr.

The Other County Fair


In 1908 "The Four County Fair" was incorporated (PDF) by a group of 11 DeRuyter men - W H Baily, C P Monro, J E Merritt, A L Smith, I E Smith, J C Stillman, D R Griffiths, B F Cran, M D Murray, O M Blanchard, and A D Warren. All of these men served as first year directors of the corporation and all but A L Smith were shareholders. Advertising (PDF) for its initial year proclaimed that "It sounds big, it is big, it is bound to be bigger." An extensive racing program over three days included a farmer's running race "open to any farm horse in the four counties." Based in DeRuyter this fair has been on-going for more than 100 years drawing attendees and participants from the counties of Madison, Cortland, Chenango, and Onondaga. As early as 1915 the Four County Fair has been known as the DeRuyter Fair.