Madison County's history includes a long list of creative souls. Leaders, inventors and artists are numerous, from directing the Armed Forces to an Olympic gold medalist, to the first American microscope fabricator to motion picture devices and agricultural implements, the list is long. Specifically in the Town of Eaton, Emily Chubbuck Judson, popularly known as Fanny Forrester, was born in West Eaton in 1817. Her most remembered work was "Alderbrook," a collection of sketches and poems first published in the New York Mirror. Another international traveler and famous humorist, Melville Landon known as Eli Perkins, attended schools and later Madison University.

Wood Taber and Morse Steam Engine Works was established in Eaton in 1848 (then A. N Wood, only the third maker of steam engines in America). Their goods were nationally distributed and many inventions are credited to those industrious gentlemen. Their four-wheel drive traction engine brought international attention to Eaton when they won a gold medal at the 1886 London World's Fair. Besides this industry, foundries, distilleries, woolen mills, gristmills, powder mills, a comb company and a cotton mill were industries that created jobs and growth for the region. Samuel Chubbuck Jr. invented the key and sounder for Morse's telegraph.

U.S. Patent No. 19,430 (PDF), dated February 23, 1858, was issued to James H. Maydole, of Eaton, New York, for an improvement in machines for gathering stones and pulverizing earth.

The Courthouse Fire of 1864

On October 11, 1864 the courthouse in Morrisville was set ablaze. Many have speculated that it was members of the Loomis gang who set the fire for the purpose of destroying indictments and other court documents that may have led to their imprisonment. The following was provided to us by Elisha Davies at the Cazenovia Public Library:

Excerpt from the Cazenovia Republican, October 19, 1864 from an article originally appearing in the Morrisville Observer: "At about half-past two o'clock on Tuesday morning our village was startled by the cry of fire! when flames were discovered issuing from the cupola of the Court House and also from the vestibule of the lower floor in the north-west corner of the building. The fire engine was promptly on the ground, and our firemen proceeded with their usual alacrity to combat the flames; but it was soon discovered that the hose had been cut and nearly severed in several places, so that it was almost impossible to make any efficient headway against the devouring element, and in about two hours the building was consumed. Fortunately the air was quite still and a slight rain had fallen the previous evening, so that the adjoining buildings (the Jail and Clerk's Office) were saved from destruction. Most of the books and papers of any great value in the Court House were rescued."

"As to the origin of the fire, there is no question that it was the work of an incendiary, who went about his fiendish business in too thorough and systematic a manner to fail in accomplishing his design, or, it is to be feared, to run much risk of detection."

Rebuilding was a priority for the Madison County Board of Supervisors:
Excerpt from the Cazenovia Republican, November 2, 1864: "Resolved, That immediate steps be taken by this Board to re-build a Court House for the County of Madison, in place of the one recently consumed by fire."

Here is a listing of accounts "audited and allowed by the Board of Town Auditors" for Eaton, November, 1848. Compare this statement with the same from the town of Stockbridge. 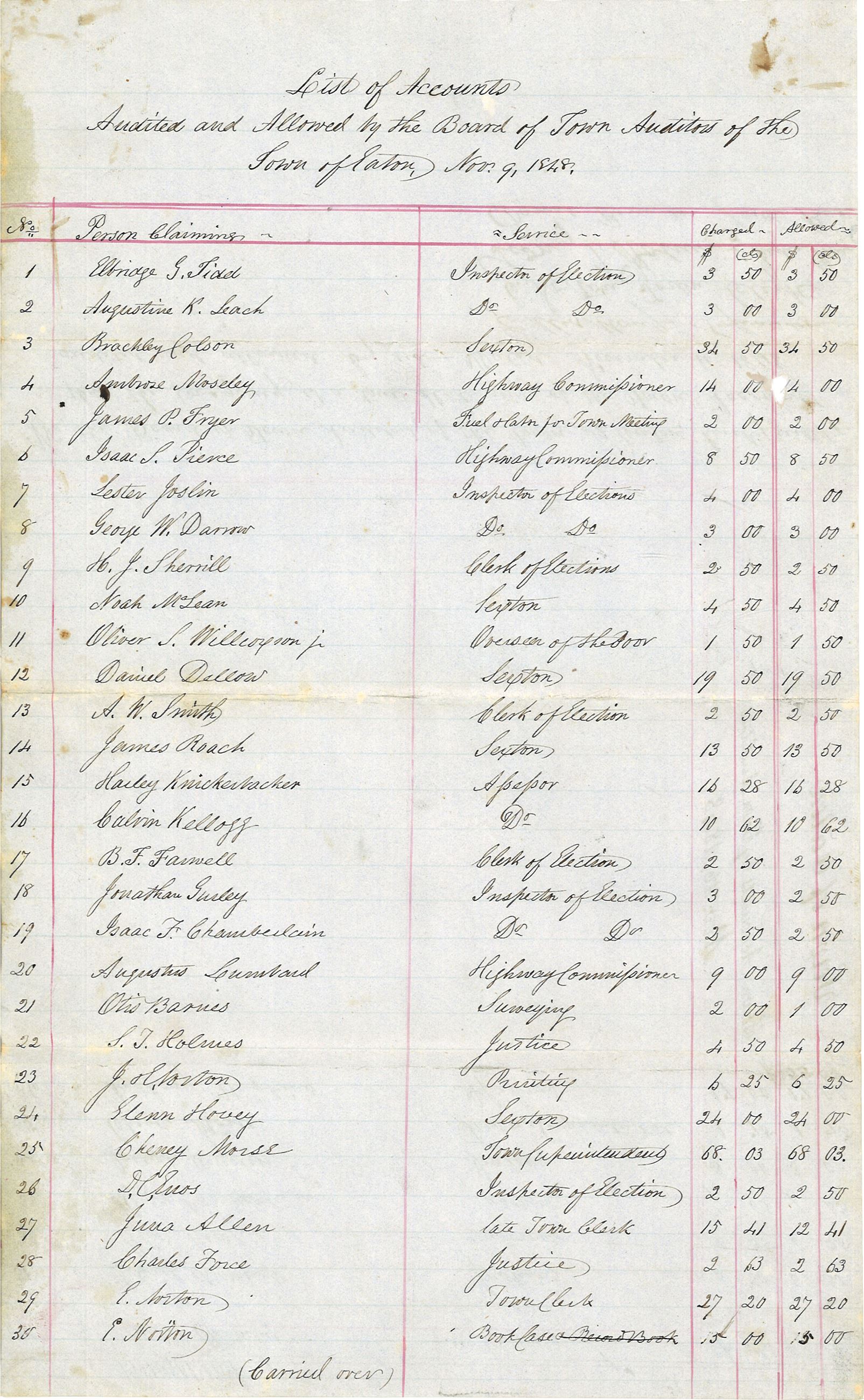 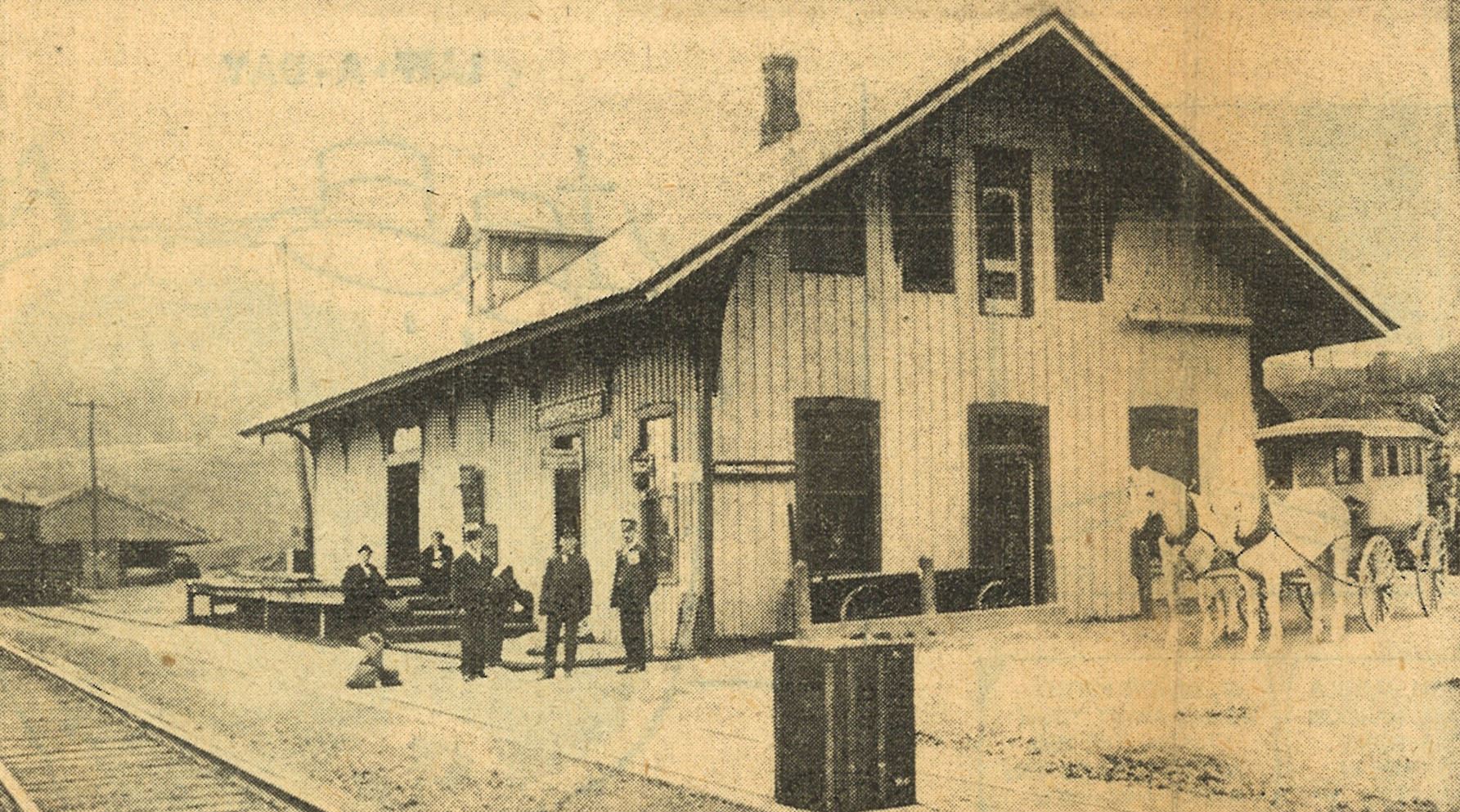 "Waiting at the station - Morrisville Station in 1907 was the stopping off place for the county seat at Morrisville. Shown above are the ticket agent, right, now deceased, and the bus driver, Nathan O Maydole, also deceased. The Maydole Bus "dragged over the hill" two and a half miles in "weather rainy or shine." - Oneida Daily Dispatch, Tuesday, October 28, 1958

Sheriff of Broome County offering reward for the capture of several individuals. Apparently Edward S Judd "is on his way to Canada." 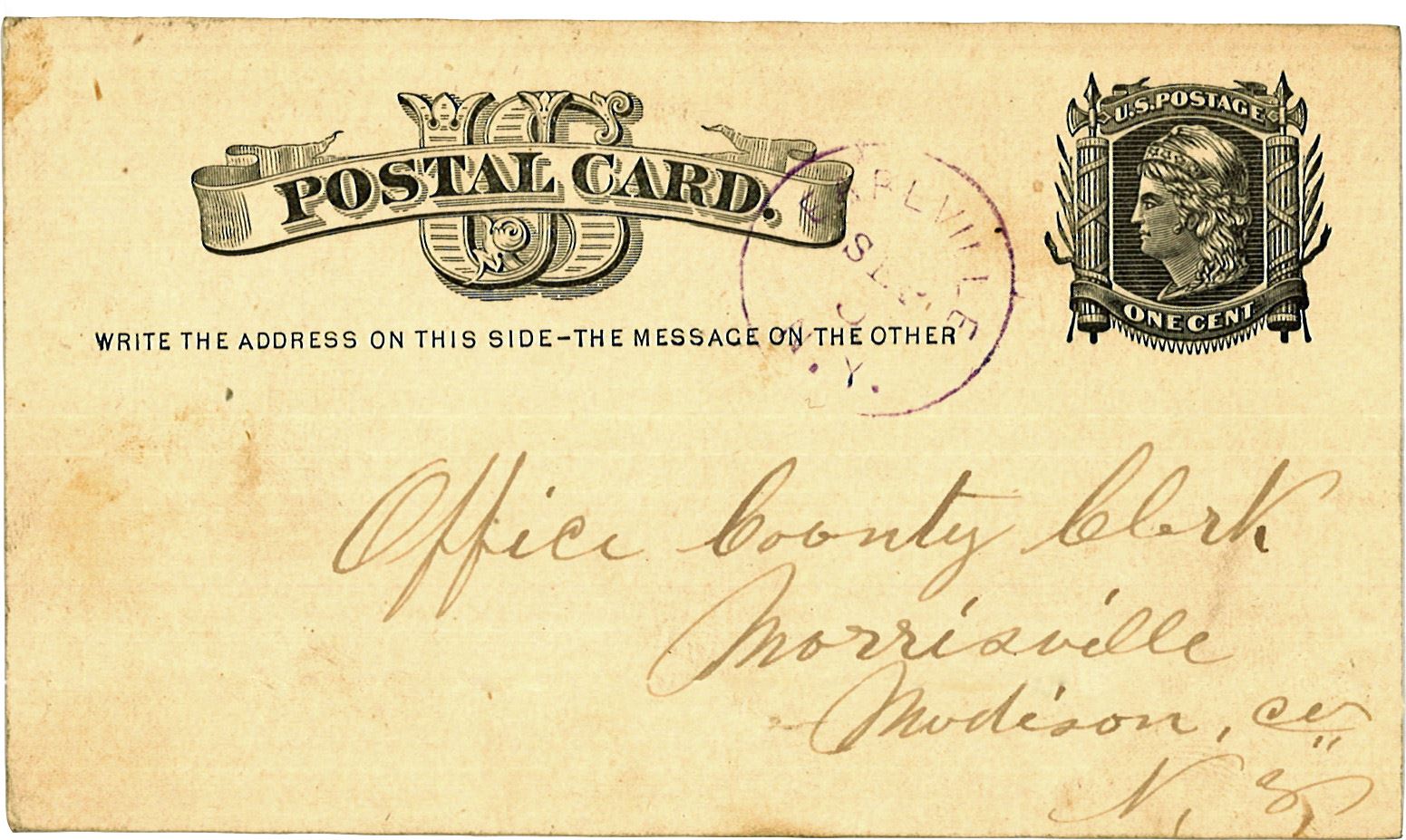 Postal Card from 1879 addressed to the County Clerk.
On the reverse the message is from Rev. J L Short requesting the marriage of Wallace W Allen and Celestine M White to be recorded.
Pay Taxes Online
Notify Me®
Employment
Emergency
Management
Bids & RFPs
Real Property
Lookup
[]