Image does not exist

The Mystery of Muller Hill


The story of Louis Anathe Muller (or Lewis Anathe Muller as it is sometimes written) is one of mystery and intrigue. According to The Dictionary of the French Revolution a Louis Anathe Muller was banished from Paris in 1805 for his republican feelings and independence. It is unknown if Muller was an assumed name. Either way, the Muller Hill resident fled France and landed in New York City in 1807. There he purchased 2700 acres from Daniel Ludlow in what is now Georgetown and traveled north and west towards Madison County. (Read a transcript of the deed.) In 1808, he rented a house on Payne Street in Hamilton while he oversaw the building of his fortified house on top of a hill, hiring 150 people to clear 300 acres of land and to build a fortified home. He moved onto his estate in 1809 with his wife Adelaide and their two sons Charley and Carlos. The one-story home was over 2100 sq. ft. (enormous for the time), with reports of five marble fireplaces and a secret escape from the basement. Muller donated land to individuals who would agree to settle on his lands. This resulted in the establishment of the hamlet of Bronder Hollow - Bronder being the last name of the first person to receive lands and build here. Muller was incredibly private and it is recorded that he always had two body guards at his side. This only adds to the mystery. He left almost as quickly as he arrived, after word that Napoleon was overthrown in 1814. Muller returned once to his Georgetown home in 1816 and found his home ransacked and all of his furnishings gone. Returning to New York City he arranged to have the house and land sold. In April of that year the property was sold and Muller returned to France. He would never be heard from again.

The sale of Muller's estate to Abijah Weston can be found in book of deeds L beginning at page 515. Altogether the deed conveys 1,628.5 acres of land, the house, barns, grist mill, saw mill and other improvements for the sum of $10,500.

It was commonly thought that Muller was French royalty living under an assumed identity; some even voice the possibility that he was the Comte d'Artois who later became Charles X, King of France. Others have said he was Charles Ferdinand, the Duc de Berry son of King Charles X. Only two things will ever truly be known about the man on Muller Hill. First he was French, and second we will never know who the mysterious man truly was. 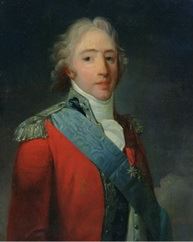