Tobacco Use Disorder is assigned to those who are dependent on nicotine related to the use of tobacco products. In addition to the highly-addictive chemical nicotine, tobacco products also contain many carcinogens, or cancer-causing substances. Smoking harms nearly every organ of the body and is recognized as the leading cause of preventable death in the United States.

Most tobacco products (cigarettes, menthols, and cigars/cigarillos) are burned, and their smoke inhaled. Smoking causes disease and disability across the population, even among those who do not smoke themselves and are only exposed to second-hand smoke. 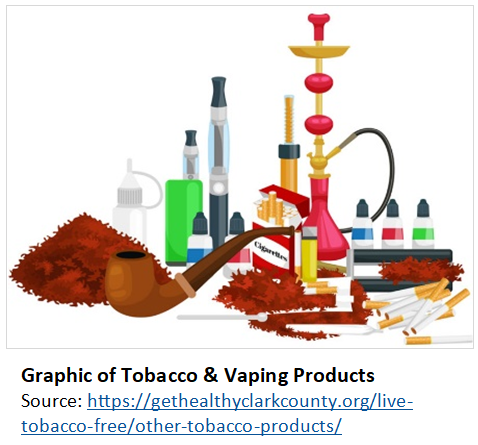 In the most recent New York State (NYS) Behavioral Risk Factor Surveillance System, 21% of adults in Madison County identify as current smokers compared to only 12.8% of New York State adults.

Nearly 35% of Madison County adults who make less than $25,000 use tobacco products. This is significantly higher than New York State adults with the same income (20.4%).

According to the 2018 Madison County Teen Assessment Project (TAP) Report, only 10.9% of students had ever tried a cigarette, down from 15.7% in the previous assessment. 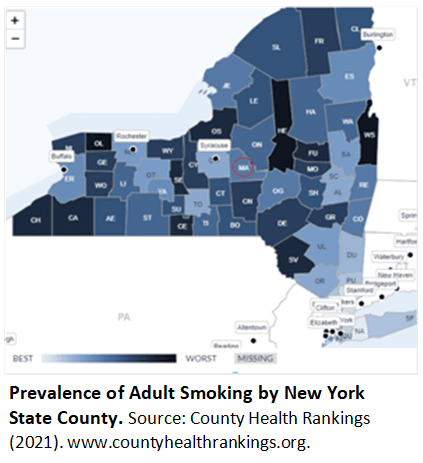 E-cigarettes (sometimes called “e-cigs,” “vapes,” “e-hookahs,” “vape pens,” and “electronic nicotine delivery systems”) emerged into the US marketplace in 2007 and have increased in popularity since. E-cigarettes, come in a variety of shapes and sizes. They produce an aerosol by heating a liquid that usually contains nicotine or cannabis, flavoring, and other chemicals.

“Vaping,” a slang term for the use of e-cigarettes, has gained significant traction among youth populations.  It has been the most popular tobacco product among this age group since 2014. Strong health warnings have been issued to counter the impact of aggressive marketing and increasing rates of nicotine addiction among middle and high school students.

E-cigarettes are not an FDA-approved smoking cessation product. Researchers are still learning about the potential harm caused by these products in the short- and long-term.

There are several health concerns around the use of vaping products. As of 2020, there were 254 reported cases in NYS and 2,807 nationwide hospitalized for e-cigarette, or vaping, product use-associated lung injury (EVALI). Although still under investigation, there has been a strong link between usage of vaping devices containing tetrahydrocannabinol (THC) – cannabis that contains Vitamin E acetate – and EVALI. In addition, most vaping devices contain nicotine, which is addictive and can damage brain development in youth.