Samuel R Mott was born in Saratoga County in 1826. He became involved in the cider making business at an early age under his grandfather's tutelage. He married Ann M Coon in 1847 and the couple had five children (John Coon, Mary Frances, Frederick Gates, Samuel Rogers Jr, and Seward). Madison County records show that SR Mott entered into the cider making business with Horatio Brown and John Beach in 1868. Their processing facilities were located in the hamlet of Bouckville, town of Madison. Eventually Mott would buy out his business partners as well as his competition (the Peet Brothers). Mott went on to be one of the largest cider and vinegar manufacturers in the state. The company was merged a number of times and today is part of the Dr Pepper / Snapple Group.

Here is a chronological view of SR Mott and his cider business as viewed through records filed in the Madison County Clerk's office.

June 1, 1867: Charles F Dedrick, Horatio S Brown and John C Beach purchase the "distillery premises" in Bouckville from William W Woodhull and his wife Jennett, Joseph W Forward and his wife Elizabeth for $2300 (Deed book 111, Page 516). Woodhull and Forward operated a distilling business for many years in Bouckville. Note: on the deed Dedrick is listed as being from Saratoga County, Brown and Beach both from Montgomery County. Did Mott and Dedrick know each other? Did Mott learn of the distilling property from Dedrick? (This item is provided for background information.)

January 31, 1868: Samuel R Mott, Horatio S Brown and John C Beach purchase land from Philander P Barker in the town of Madison along the west bank of the Chenango Canal. Lot size - 14 rods (66 feet along the westerly bank of the canal). Sale price $137.50. This strip of land provided access to the canal (Deed book 113, Page 324). Mott is listed as being from Saratoga County on the deed. He had not yet relocated to Bouckville.

April 6, 1868: Ann M Mott (wife of Samuel R) purchases the westerly half of the old McClure Tavern in Bouckville from William and Mary Coolidge (they resided in the easterly half of the structure). The purchase price is $2500 (Deed book 114, Page 221).

July 19, 1870: Samuel R Mott purchases all of the remaining interest in the "distillery premises" and the "rectifier" lot from Horatio S Brown and Mary Brown, John C Beach and Emily Beach for the sum of $4500 (Deed book 121, Page 433). 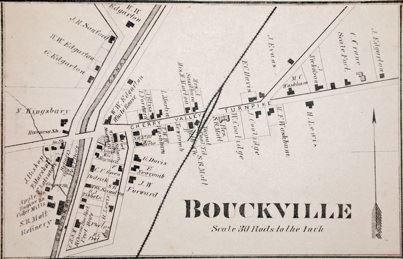 1884: SR and John Coon become partners and incorporate under the name "SR and JC Mott." (John Coon had his own cider business in New York City.)

Transcript of Incorporation
Transcript of Incorporation of SR and JC Mott from Book of Miscellaneous Records B, Pages 408, 409:
We Samuel R Mott, John C Mott and Frederick G Mott desiring to form a Company pursuant to the provisions of an act passed by the Legislature of the State of New York February 17 1848 and Entitled "An Act to authorize the formation of Corporations for the manufacturing mining mechanical or chemical purposes" and of the several acts extending and amending the said act do herby certify:
In witness whereof we have hereunto set our hands this eighth day of September in the year one thousand eight hundred and eighty-four.

1889: Book of Miscellaneous Records B, Page 423 - At stockholders meeting (SR is chairman) a vote is taken to increase the capital stock of the corporation to $100,000.

1889: At the same stockholders meeting a vote is taken to extend the existence of the corporation from five years to fifty years (to September 20, 1933) (Miscellaneous B, Page 425). This entry and the previous entry are repeated on page 433 recorded on 8/24/1899.

1906: It was not until this late date that Ann M Mott deeded the house (see entry above) to Samuel R Mott. This deed has the same description as the earlier deed, half of the "dwelling house formerly owned by William Coolidge and formerly the McClure Tavern." Note that the deed is not adding Samuel R, but replacing Ann M, i.e. Samuel R now owns the property in its entirety. One can speculate that the house was in Ann's name to keep personal property separate from business property (Deed book 217, page 375).

The final document related specifically to Samuel R Mott in records on file with the County Clerk's office is his will (Deed book 244, page 500). By this time SR was survived by only two sons, Fred G and Samuel R Jr. Fred inherited the house and one-half of the remainder of the estate. The other half of the estate was put into trust for Samuel R Jr.


Erastus (sometimes called Erasmus) Cleveland (also Cleaveland) was born in Norwich, Connecticut in 1771. He relocated to the town of Madison in 1793 after visiting the year prior. He is credited with building the first saw mill (circa 1794) and grist mill (circa 1795) on the Oriskany Creek in the town of Madison. He was an industrious man involved in distilling, brewing, carding, textile manufacturing (satinet cloth), and trading in cattle.

When Hamilton was divided in 1807 it was Cleveland that recommended the name "Lebanon" for one of the new towns.

Cleveland served two campaigns during the War of 1812 at Sackett's Harbor. Upon leaving federal military service he received 160 acres of bounty land.

While serving as Assemblyman in 1833 Cleveland was instrumental in securing funding for the construction of the Chenango Canal.

Hops Capital of the United States


James Cooledge (also appears as Cooleg or Coolidge) was from Stow, Middlesex County, Massachusetts, and came to Madison in 1806. Hammond's History of Madison County states that the first commercial crop of hops grown in Madison County (perhaps in Central New York) was raised by Mr. Cooledge. Hops were, and still are, a main ingredient in the production of beer. The hop is what typically gives a beer its distinct flavor and aroma. In 1808, Cooledge began the hop culture in Madison County by gathering all the roots that could be spared from the single hill or two in each of his neighbors' gardens, multiplying stock year after year, and supplied home breweries.

In the fall of 1816, Mr. Cooledge took the first western hops to the New York City market. This resulted in interested dealers offering inducements to growers in Central New York. His adjoining neighbor, Solomon Root, also engaged in hop growing and about the year 1817 or 1818 and sold two tons of hops at $1,000 per ton. After this, farmers of this section needed no urging to go into the business.

During the next forty years the town of Madison's growth mirrored that of the state. In 1859 NY State produced 80% of all hops grown in the United States. In 1878 the town of Madison was the second largest producer of hops in Madison County.

According to Michael A. Tomlan's book Tinged with Gold; Hop Culture in the United States the development of the railroad and the migration to the west led to a decline in New York's hop dominance. Commercial farms developed in the far west allowed farmers to plant hundreds of acres of hops compared to the small 4 to 6 acre farms that were more common in New York. Due to the weather the western hops cost less to produce and produced far more hops per acre.

For the past 15 years the Madison County Historical Society has hosted HopFest in honor of Madison County's hop heritage. There is a renewed interest in hop growing in the county.

The Madison County archival collection of deeds and mortgages contains one mortgage dated April 4, 1831 between George and Prudence Winslow and James Coolidge. The Winslows are receiving $500 from Coolidge against a 94 acre parcel in the Town of Madison, more specifically the northerly subdivision of lot number 2. Attached to the original mortgage is a statement dated April 1, 1835 that the mortgage has been satisfied and paid in full, signed by Coolidge. This is somewhat unusual as these documents are typically kept separate and filed in different volumes. It may be that the Winslows attached the satisfaction to the original mortgage and filed the two together in this manner. 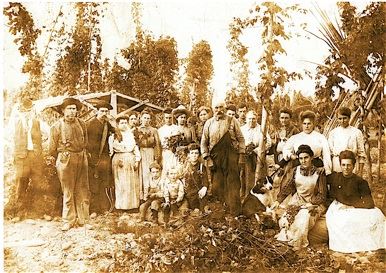