Sands Higinbotham (b. 1790 d. 1868) is often referred to as the "founder of Oneida." In 1827 he purchased a 200 acre tract of land from the State of New York west of the Oneida Creek. He purchased additional lands in 1829. A section of this land was cleared and a house was built on what is today Main Street. The family moved here in 1834. Higinbotham contributed land to the Syracuse and Utica Railroad under the stipulation that the railroad stop all passenger trains at a depot he constructed for refreshments. This resulted in the development of Oneida Depot.

Sands' son Niles (b. 1813 d. 1890) purchased land in Oneida and donated it for the construction of a village park. He also donated land to the Presbyterian, Episcopal, Baptist and Methodist churches. During 1849 to 1850 he had constructed a fine brick and stucco house he called Cottage Lawn (home of the Madison County Historical Society) on property located at the corner of Main and Grove streets. Upon completion of the home Niles, his wife Eliza, and their two daughters Lily and Louise moved in. The home was occupied by Higinbotham family members until 1934 when Louise bequeathed the property to the Madison County Historical Society.

The Oneida Valley Bank was established in 1851 by Niles, his father Sands, and Niles' good friend Samuel Breese. According to the incorporation papers on file Niles held 940 shares, Sands 40 shares, and Samuel Breese 70 shares. 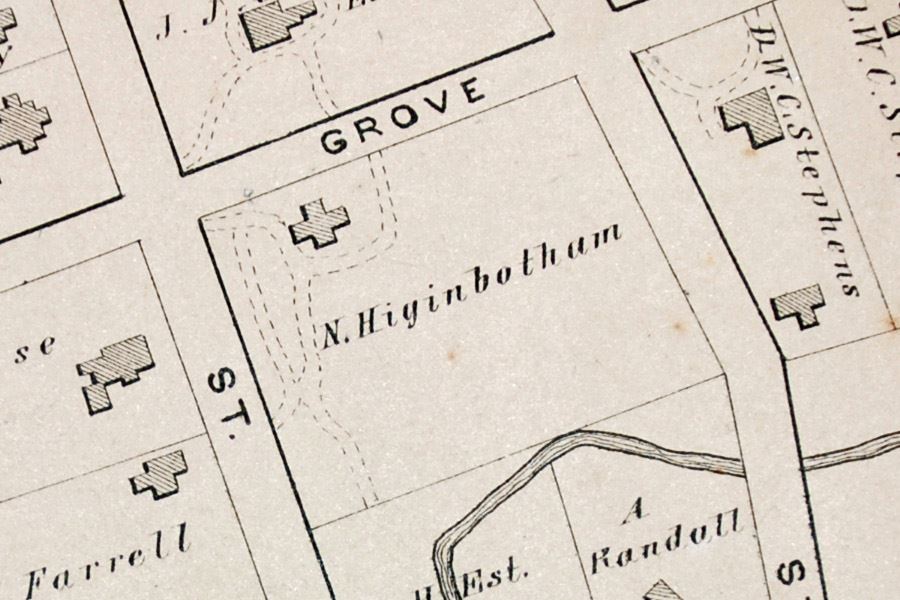 
On May 20th, 1903 the City of Oneida sent the following "Sidewalk Notice" to Louisa (s/b Louise) A. Higinbotham:
"To Louisa A. Higinbotham

In making said improvement you are required to lower said sidewalk and conform to the grade established by the city engineer as shown upon a map or maps filed in the office of the city clerk and which grade will be furnished to you upon notice whenever required by you.

In making said improvement you are required to use the following material cement or flagstone. Said sidewalk to be of the width of five feet and to extend the whole length of said premises upon said street, the same to be constructed in manner satisfactory to the Board of Public Works. In case of your neglect to make said walk safe for public travel and to protect the public from danger and injury therefrom, the City of Oneida will hold you liable for all damages resulting from your negligence.

By order of the Board of Public Works
J.F. Connor, Clerk"

Notice in the above that the property is listed as being located on the west side of Main Street. In fact, Cottage Lawn, the Higinbotham homestead, is located on the east side of Main Street. This point is used in a legal argument by Louise Higinbotham's attorney, E L. Hunt. She further states in her argument that there is no deed or easement to the City of Oneida for Main Street, that she owns the lands from the center of the street eastward, that her father, Niles, owned the land before her and was owned by her grandfather, Sands, prior, that the existing sidewalk is new and in good condition. Lowering the grade by six feet would require the removal of several 35 year old trees that provide shade and add to the value of the property. The City of Oneida intended to construct the sidewalk as stated and had contracted with parties to remove the trees (their payment was to be the lumber and $6) and for others to remove the "dirt" - their payment being the quantity of "dirt" removed. Louise Higinbotham's attorney argues that the trees, lumber, and soil are the rightful property of Louise Higinbotham and cannot be given away by the City of Oneida.

A restraining order was issued and work ceased or was never begun. If you drive by Cottage Lawn, you will see that the sidewalk remains at an elevation approximately 6 feet higher than Main Street.


The Lloyd Creamery filed their certificate of incorporation in December of 1909. The purpose of the business was to "...buy and sell milk and cream, butter and cheese, and all other dairy products at wholesale and retail; to operate milk routes; to own and conduct dairies..." The officers of the corporation were Arthur A Lloyd, President and Gustavus Uhlig, Secretary. Corporate offices were at 202 Maple Street, Oneida.

In February of 1922 the Syracuse Journal newspaper reported that the price of milk from the Lloyd Creamery was 10 cents per quart.

Mr. Lloyd retired from the business in 1926 and sold all of his shares to Mr. Uhlig. That same year the name of the corporation was changed to Oneida Pure Milk Company. Directors of the company were listed as Gustavus Uhlig, Irene H Carson, and Thomas Carson.

In 1936 the name of the corporation was changed once again becoming Oneida Cedar Brook Dairy Inc. The officers of the newly named corporation were W Gordon Holmes, President; Edna M Holmes, Secretary; and Gustavus Uhlig, Vice President and Treasurer.

The Oneida Cedar Brook Dairy was dissolved in 1952 only to be re-incorporated by the Uhligs and Isabelle Mae Davis in 1953. The end finally came four years later in 1957.

Here is a sketch of Lloyd Creamery's trademark registered in 1925. 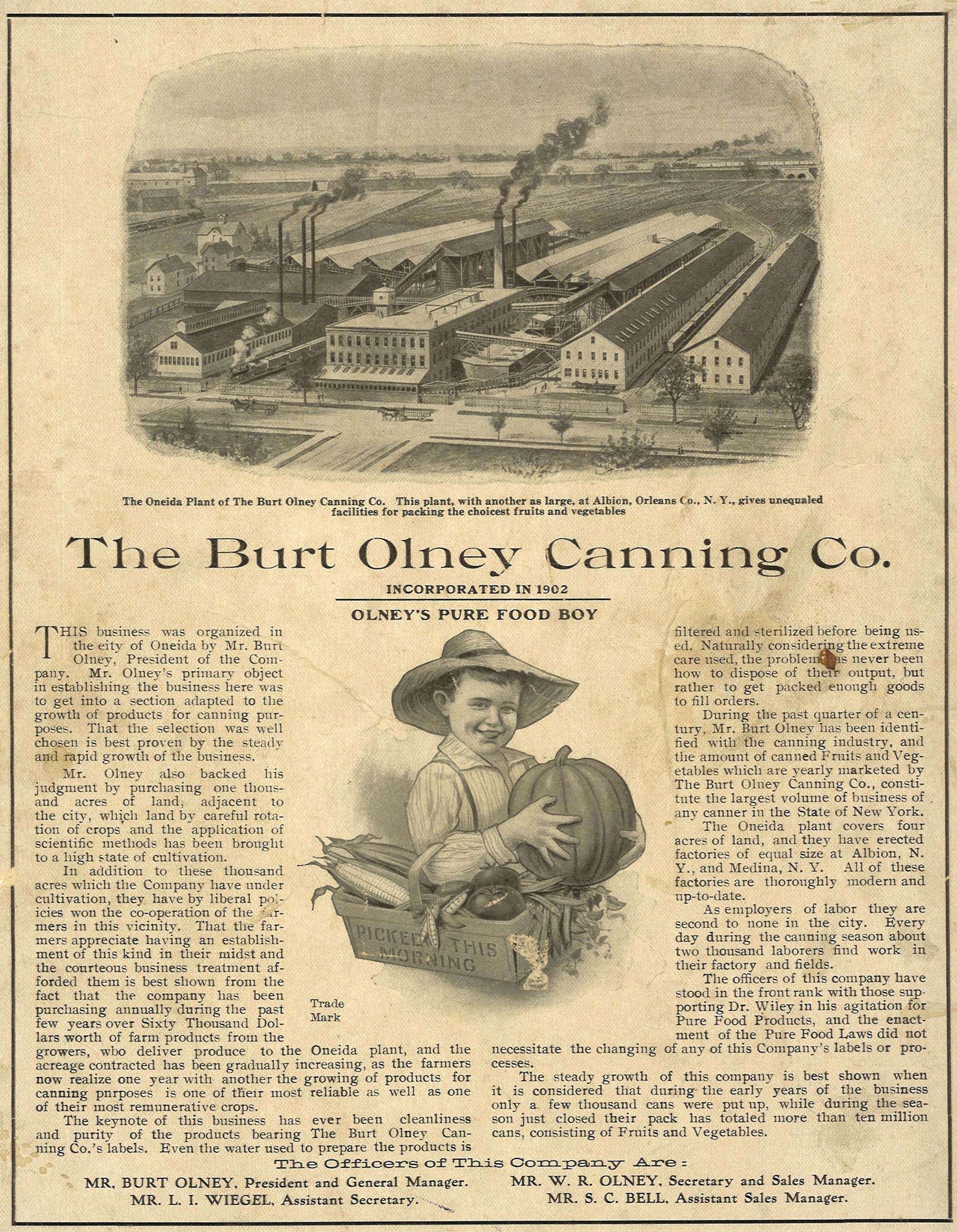 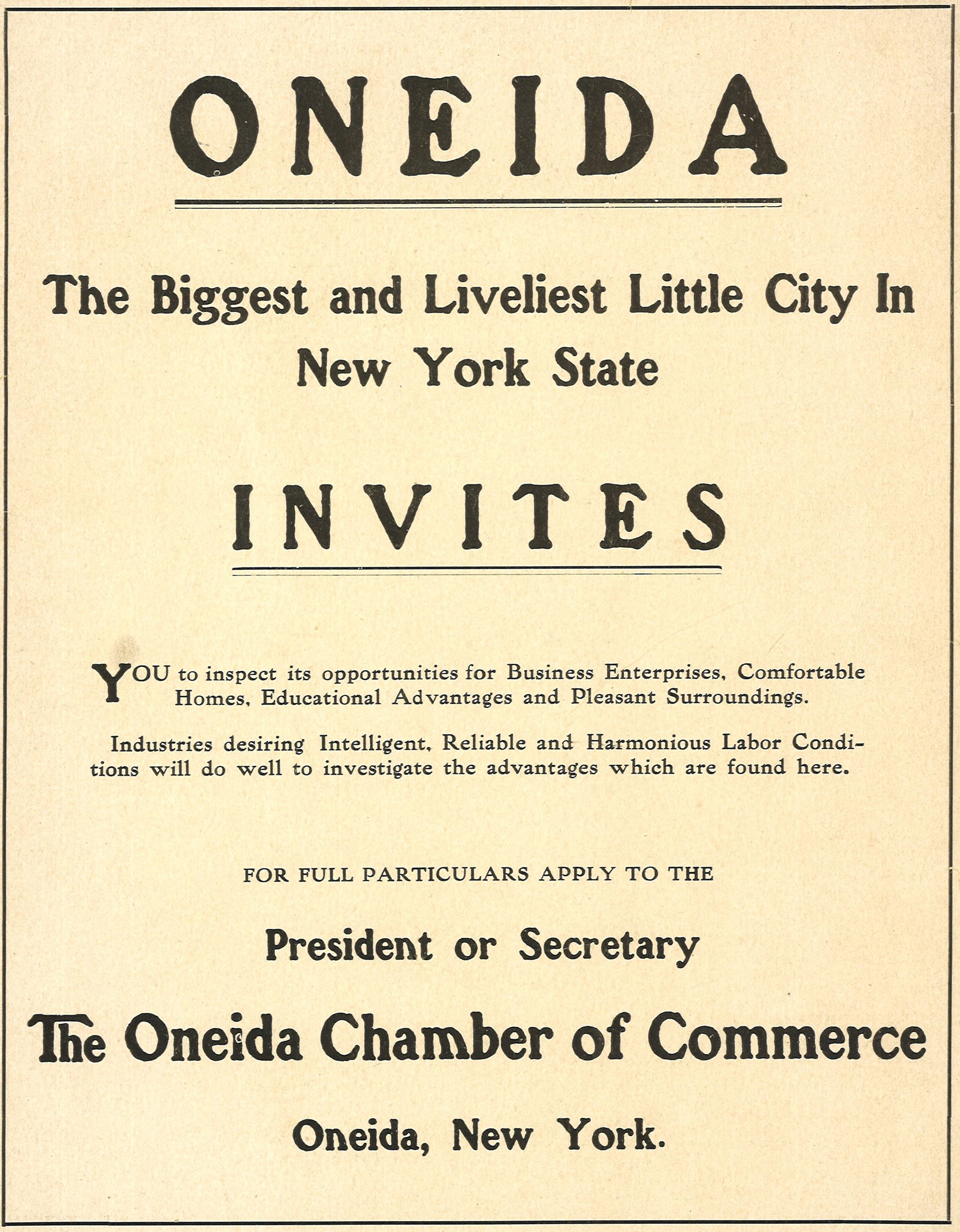 The O W Sage Company, manufacturer of window sashes, blinds, and doors, was incorporated in 1887 and went into receivership in 1898.
On April 25, 1898 the contents of the factory were auctioned.
View the auction poster (PDF).
The Burt Olney Canning Company took over the manufacturing site.
Pay Taxes Online
Notify Me®
Employment
Emergency
Management
Bids & RFPs
Real Property
Lookup
[]