Background: Col. William Stephens Smith fought in the Revolutionary War alongside generals Washington and Lafayette and served as aid to Baron von Steuben. After the war Smith served as a diplomatic representative in London (1784). Here he met and courted Abigail Adams (daughter of President John Adams and Abigail Smith Adams). The two were wed in London in 1786. They had four children: William Steuben (birth 1787 death 1850), John Adams (birth 1788 death 1834), Thomas Hollis (birth 1790 death 1791), and Caroline Amelia (birth 1788 death 1852). In 1788 the Smiths returned to America and settled near New York City. Col. Smith was appointed by President Washington as the first U.S. Marshal for the NY district (1789). Smith later was appointed to the position of surveyor for the Port of NY by President John Adams (1780).

Smith sought his fortune as a land speculator and was granted a patent in 1794 for Townships 2, 3, 4, 5, 8, and 9 of the Chenango Twenty Towns - a total of 150,000 acres at a cost of 24,375 pounds sterling. Lots 2, 3, 4, and 5 are present day Eaton, Madison, Lebanon, and Hamilton respectively. Lots 8 and 9 are Smyrna and Sherburne respectively in Chenango County. In the late 18th century all of this land was wilderness. Some time after 1794 Smith either sold or turned over lots 2, 3, 4, and 5 to Sir William Pultney. Smith retained lots 8 and 9 in Chenango county and a large tract of land bordering the Chenango River in Madison County. Col. Smith's brother, Justus B. Smith, was assigned the task of subdividing and selling lots from this tract. Justus built a large house in Smith's Valley from where he conducted the land sales business. Col. Smith had a small frame house located near here which he occupied infrequently. Both Col. Smith and Justus B. died in Smith's Valley in the year 1816 and are buried in West Hill Cemetery, Sherburne. 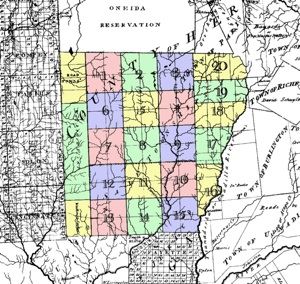 Deed From Justus B. Smith to John W Bulkley

The parcel is located in the southeastern corner of the town of Lebanon. 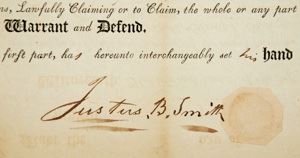 The parcels were located in the towns of Eaton, Hamilton, and Lebanon. View a listing (PDF) of all the parcels aggregated from the County Clerk's deed books.
Pay Taxes Online
Notify Me®
Employment
Emergency
Management
Bids & RFPs
Real Property
Lookup
[]