Peter Smith was born near Tappan, NY in the year 1768. At the early age of 16 he began working as a clerk in the counting house of Abraham Herring and Co. Just one year later this entrepreneurial young man set up his own country store at Fall Hill (south of Little Falls, Herkimer county and north of the present day NYS Thruway) - quite a distance away from his birthplace. In 1787 he moved further west to Old Fort Schuyler (Utica) and opened the first general store in this part of New York. At this location he was successful trading with the Oneidas, mostly in furs, in exchange for grain. We are told that Smith could speak the language of the Oneidas. When and where he learned this talent is uncertain. His ability to communicate with these people in their own language may well be why he was so successful in business with them. It was here that Smith met John Jacob Astor and the two entered into partnership in the fur trade. They later worked together acquiring land. This business relationship did not last long. In 1794 Smith entered into a lease agreement with the Oneidas for 50,000 acres of land for 999 years. These lands were called the New Petersburgh Tract. Smith began subdividing the land and leasing parcels for 21 years. But in 1795 the State of New York made a treaty with the Oneidas and purchased the lands that Smith had leased. Smith was able to purchase from the state those lands that he had not leased to others - about 22,299.5 acres at a cost of about $2 per acre ($44,599). It is estimated that Smith accumulated a total of between 500,000 and 1,000,000 acres of land in New York state.

In 1806 Smith relocated to the village bearing his name, Peterboro, in the town of Smithfield (also named by and for Smith). This same year Peter Smith was appointed by the Council of Appointment as one of the judges of the Court of Common Pleas. A courthouse not being available the first session (June) court was held in the schoolhouse at Quality Hill. The second session that year, July, was held at the schoolhouse in Hamilton near Elisha Payne's residence. In June of 1807 Smith was appointed First Judge of Madison County a title he held until 1822. During the July 1807 term of Oyer and Terminer First Judge Peter Smith sat with Supreme Court Judge Sylvanus Smalley and Assistant Judges Elisha Payne and David Cook to hear the case of Alpheus Hitchcock a music teacher accused of murdering his wife by arsenic poison. Hitchcock was found guilty and sentenced to hang. 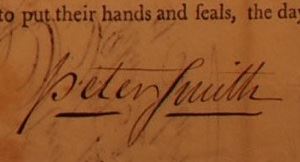 Smith was married twice. His first marriage was to Elizabeth Linvingston from which six children were produced, the most famous being the abolitionist and philanthropist Gerrit. Smith's second marriage was to Sarah Pogson which ended in separation.

At the age of 50 Peter turned over his land holding business to his son Gerrit and moved to Schenectady where he died at age 69 in 1837. 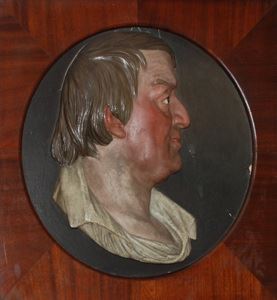