Chapman, commonly referred to as "Frank" by his peers, entered Hamilton College in 1836. He graduated from Hamilton in 1839, when he received the honor of delivering the "Philosophical Oration" and was only the second student to graduate with a "clean page," meaning he did not have a single demerit mark during his time there.

Upon his graduation, Chapman entered the law office of his father in Clockville and was admitted to the practice of law in 1841. He soon became one of the leaders of the Madison County Bar. In addition to legal cases, Chapman held many positions, including School Inspector, Commissioner, Town Superintendent, District Attorney and Postmaster for Clockville.

Chapman married Miss Huldah Wilcox of Clockville in November of 1841. Chapman and Huldah had three children, though only two lived to adulthood. One son eventually practiced law with Chapman later in life.

In 1880, Chapman moved to Oneida and continued working. He also found time to publish several letters, including "Harper's Ferry," "Washington and its Defences," and the very popular "Salem Witchcraft."

On January 24, 1883 he was appointed County Judge and Surrogate of Madison County by Governor Cleveland. The same day Chapman was confirmed by the New York Senate to fill the term of the Honorable Charles L. Kennedy after his death. After failing in his bid to keep the seat, Chapman continued to work in his law office. 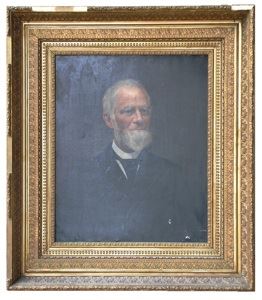 Oil on canvas portrait of Benjamin Franklin Chapman by an unknown artist.

Chapman was not only a lawyer but a surveyor as well.
Pay Taxes Online
Notify Me®
Employment
Emergency
Management
Bids & RFPs
Real Property
Lookup
[]